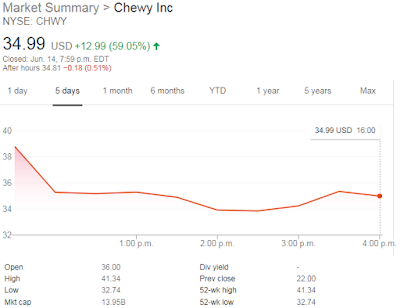 Chewy is an online pet product retailer. The stock went up 80% in midday trade Friday after it made its debut on Wall Street. The company is owned by PetSmart. The shares opened at $36, with a market capitalization of $14.3 billion. Chewy (NYSE:CHWY) stock went up 82.2% to $40.22 as of 11 AM ET. The company priced its IPO at $22 a share. This was above the $19 to $21 price range. Chewy reported a net loss of $268 million in fiscal 2018. PetSmart owns 70% of the company’s common stock and holds 77% of the voting power. It acquired the company in 2017 for $3 billion. Chewy was founded in 2011 by Ryan Cohen and Michael Day. Chewy closed its first trading day at $34.99 per share, trading 59% above its IPO price. The company calls itself the largest pet e-tailer in the United States. The company has a 60% growth rate and $3.5 billion in sales. Investors like this.

The company has challenges like the high cost of shipping. The acquisition of Chewy made sense for PetSmart. It adds online expertise to PetSmart’s brick and mortar business. It increases PetSmart’s online market share. The acquisition of Chewy was financed primarily through additional debt. Analysts estimate Chewy will be EBITDA negative for at least the next 12-24 months. After the sale to PetSmart, Chewy expanded and launched an online pet pharmacy called Chewy Pharmacy. Chewy seeks continued growth.