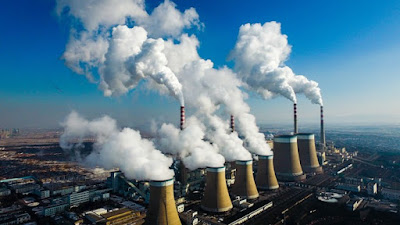 Climate change occurs when changes in Earth's climate system result in new weather patterns. These patterns can last for several decades or longer. The climate system is comprised of 5 interacting parts: 1) Atmosphere (air) 2) Hydrosphere (water) 3) Cryosphere (ice and permafrost) 4) Biosphere (living things) 5) Lithosphere (earth's crust and upper mantle) The climate system receives almost all of its energy from the sun, with a relatively small amount from earth's interior. The system also gives off energy to outer space. When the incoming energy is greater than the outgoing energy, the climate system is warming. If more energy goes out, the earth experiences cooling. Long-term averages of weather are called "climate". Changes in the long term average are called "climate change". Human activities can change earth's climate. These activities are currently driving climate change through global warming. 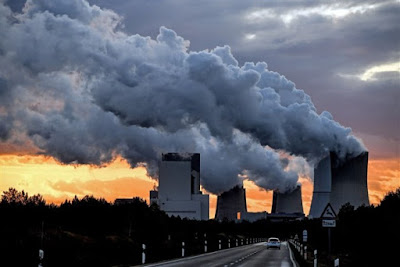 Global warming is a long-term rise in the average temperature of the Earth's climate system. There was an observed and continuing increase in average air and ocean temperatures since 1900 caused mainly by emissions of greenhouse gasses in the modern industrial economy. Many of the observed warming changes since the 1950s are unprecedented in the temperature records. In 2013, the Intergovernmental Panel on Climate Change (IPCC) Fifth Assessment Report concluded, "It is extremely likely that human influence has been the dominant cause of the observed warming since the mid-20th century." There were emission of greenhouse gases such as carbon dioxide, methane, and nitrous oxide. In the report, it says that during the 21st century, the global surface temperature is likely to rise a further 0.3 to 1.7 °C to 2.6 to 4.8 °C. These findings have been recognized by the national science academies of the major industrialized nations. Future climate change effects are expected to include rising sea levels, ocean acidification, regional changes in precipitation, and expansion of deserts in the subtropics. Surface temperature increases are greatest in the Arctic, with the continuing retreat of glaciers, permafrost, and sea ice. There would be more frequent extreme weather events such as heat waves, droughts, wildfires, heavy rainfall with floods, and heavy snowfall. There could be a threat to food security from decreasing crop yields, and the abandonment of populated areas due to rising sea levels. Greenhouse gases remain in the atmosphere for a long time. This means that climatic changes and their effects will continue to become more pronounced for many centuries even if further increases to greenhouse gases stop. Almost all countries are parties to the United Nations Framework Convention on Climate Change (UNFCCC). Parties to the UNFCCC have agreed that deep cuts in emissions are required and that global warming should be limited. Public reactions to global warming and concern are increasing. A 2015 global survey showed that a median of 54% of respondents consider it "a very serious problem", with significant regional differences: Americans and Chinese (whose economies are responsible for the greatest annual CO2 emissions) are among the least concerned. 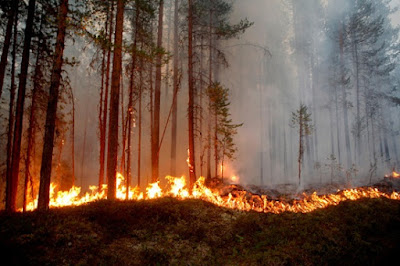 Multiple independently produced datasets confirm that between 1880 and 2012, the global average (land and ocean) surface temperature increased by 0.85 [0.65 to 1.06] °C. Since 1979 the rate of warming has approximately doubled. Since 1950, the number of cold days and nights have decreased, and the number of warm days and night have increased. Although the increase of the average near-surface atmospheric temperature is commonly used to track global warming, over 90% of the additional energy stored in the climate system over the last 50 years has accumulated in the oceans. The rest has melted ice and warmed the continents and the atmosphere. Climate proxies show the temperature to have been relatively stable over the two thousand years before 1850. 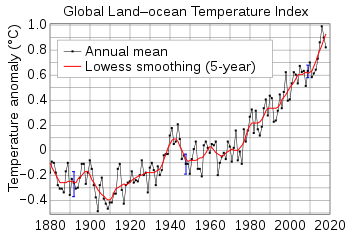 Email ThisBlogThis!Share to TwitterShare to FacebookShare to Pinterest
Labels: Climate