Aurora Cannabis Inc. is a Canadian licensed cannabis producer. It is headquartered in Edmonton. It trades on the TSE (Toronto Stock Exchange) as ACB.

As of 2018, Aurora Cannabis had 8 licensed production facilities, 5 sales licences, and operations in 24 countries. It had a funded capacity of over 625,000 kilograms of cannabis production per year. The bulk of this capacity is based in Canada. The company has a growing presence in international markets, especially Denmark and Latin America. This is the 2nd largest cannabis company in the world by market capitalization, after Canopy Growth Corporation. The company started trading on the NYSE on Oct. 23, 2018 using the ticker ACB. 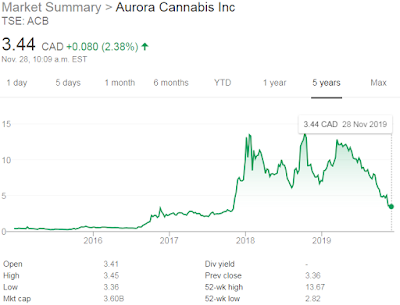 Aurora Cannabis (ACB) stock did not get a good latest earnings report. This was when it announced a 24% decrease in net revenue, which included a 33% decrease in Canadian recreational pot sales. Share price could not increase, even though the company has a cost per gram of under C$1.00 and market-leading gross margins.

Because of these events, the company announced it would stop construction at 2 facilities. This will save it approximately C$190 million. Aurora Cannabis also took steps to decrease the amount of its convertible debentures coming due in 2020.

Right now the stock price is pretty much at the lowest point of the past 2 years. The company continues to face short-term challenges. However, it's still a strong positioned Canadian Cannabis Company. It is likely to benefit from the long-term cannabis trend that is still in the early stages of growth.

There is a new marijuana product that will be allowed to be sold in Canada in December: derivatives. What are marijuana derivatives? They are extracts from the Cannabis sativa plant, usually in the form of an oil. Derivatives can be natural or synthetic (man-made). Derivatives will provide Aurora with the opportunity to expand its portfolio of brands. It could have new higher price products that have wider margins and stronger earnings. It is not clear how quickly the company can roll out these new products.

There are reasons to stay optimistic for Aurora Cannabis Stock. The increase in cannabis stores and new product lines should improve performance of Aurora in 2020. Aurora has enough production capacity to meet growing demand.
Posted by Igor B at 08:15