Aphria Inc. is a Canadian cannabis company. It is listed on the TSE (Toronto Stock Exchange) and the NYSE (New York Stock Exchange). It has a market capitalization of about $3 billion. The company was founded in 2014.

In 2017, Aphria announced a USA expansion strategy. Investors had concerns that Aphria might be delisted from the Toronto Stock Exchange or face other sanctions. This is because of the uncertain legal status of cannabis in the USA. 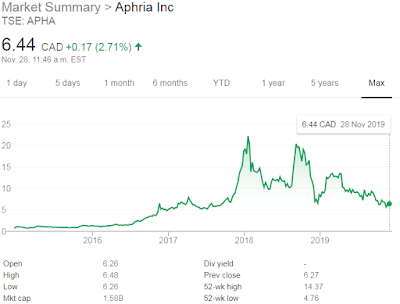 Aphria Inc. (APHA) shares lost about 13% in the past month. In the same time, the Medical sector gained about 8% and the S&P 500 gained about 3.9%. Investors of APHA are hoping for a strong next earnings release.


The price-earnings ratio, also known as P/E ratio is the ratio of a company's share price to the company's earnings per share. The ratio is used for valuing companies. You could find out whether they are overvalued or undervalued.
In terms of valuation, APHA is currently trading at a Forward P/E ratio of 73.55. Its industry sports an average Forward P/E of 26.27. It is easy to conclude that APHA is trading at a premium comparatively.
2020 will probably be a good year for Aphria. Recently the stock is low, but that could just mean that it is a good purchase heading into next year. Aphria has struggled over the past few years to generate strong returns for investors. In 2 years, the stock has fallen by about 25%.
The good thing is, Aphria is increasing its production space. It is doubling its capacity. Earlier this month, Aphria obtained a cultivation licence for Aphria Diamond. This is a subsidiary that Aphria owns 51% of. The remainder being owned by Double Diamond. The greenhouse has production space that totals 1,300,000 square feet and can grow 140,000 kg of cannabis per year. This will bring Aphria's total production space to 2,400,000 square feet. Its annual cannabis production will now be able to reach 255,000kg.
The location has "industry-scale automation technology." The technology can handle many tasks including transporting plants, trimming and waste disposal. This is a good way to decrease the costs and add to margins.
Posted by Igor B at 09:59